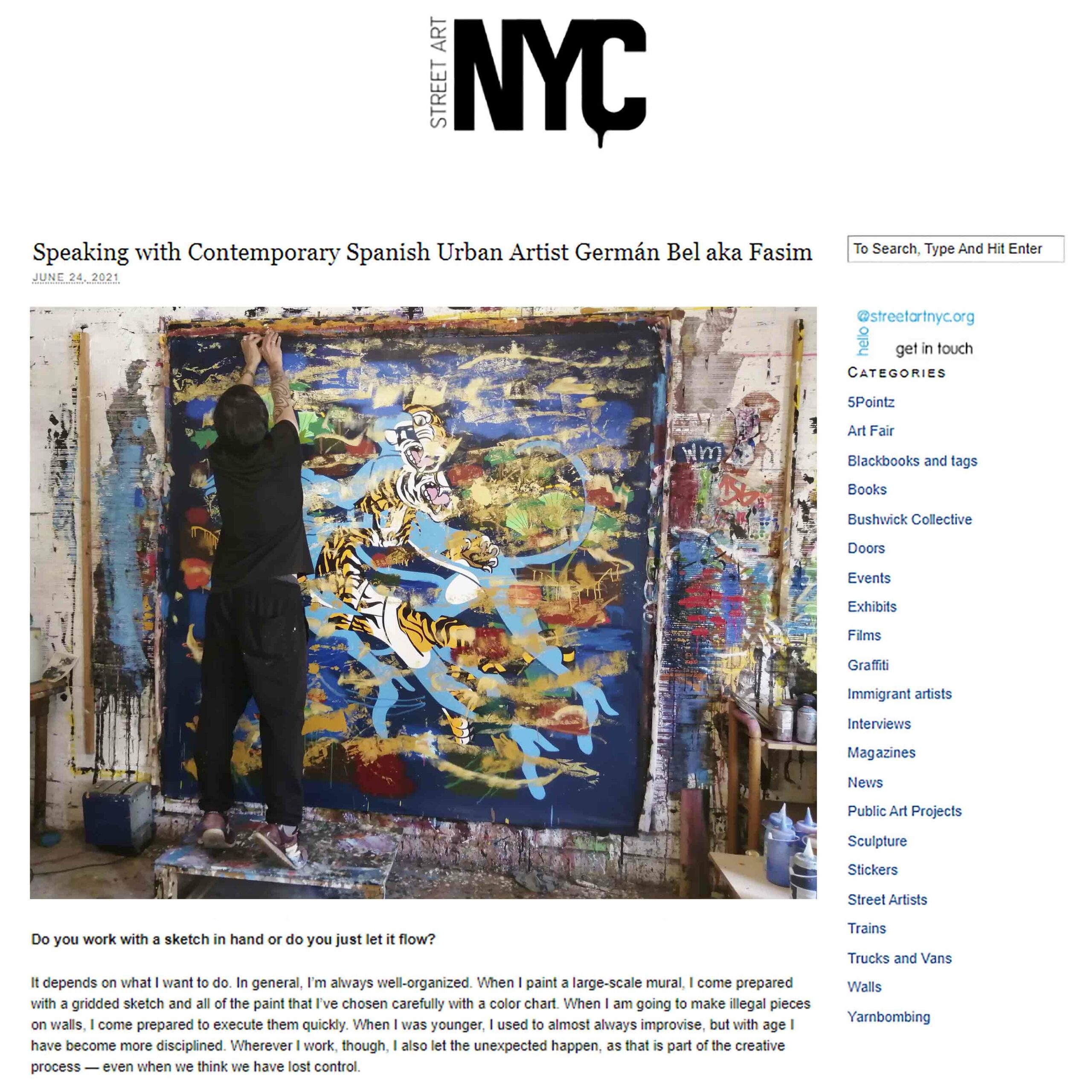 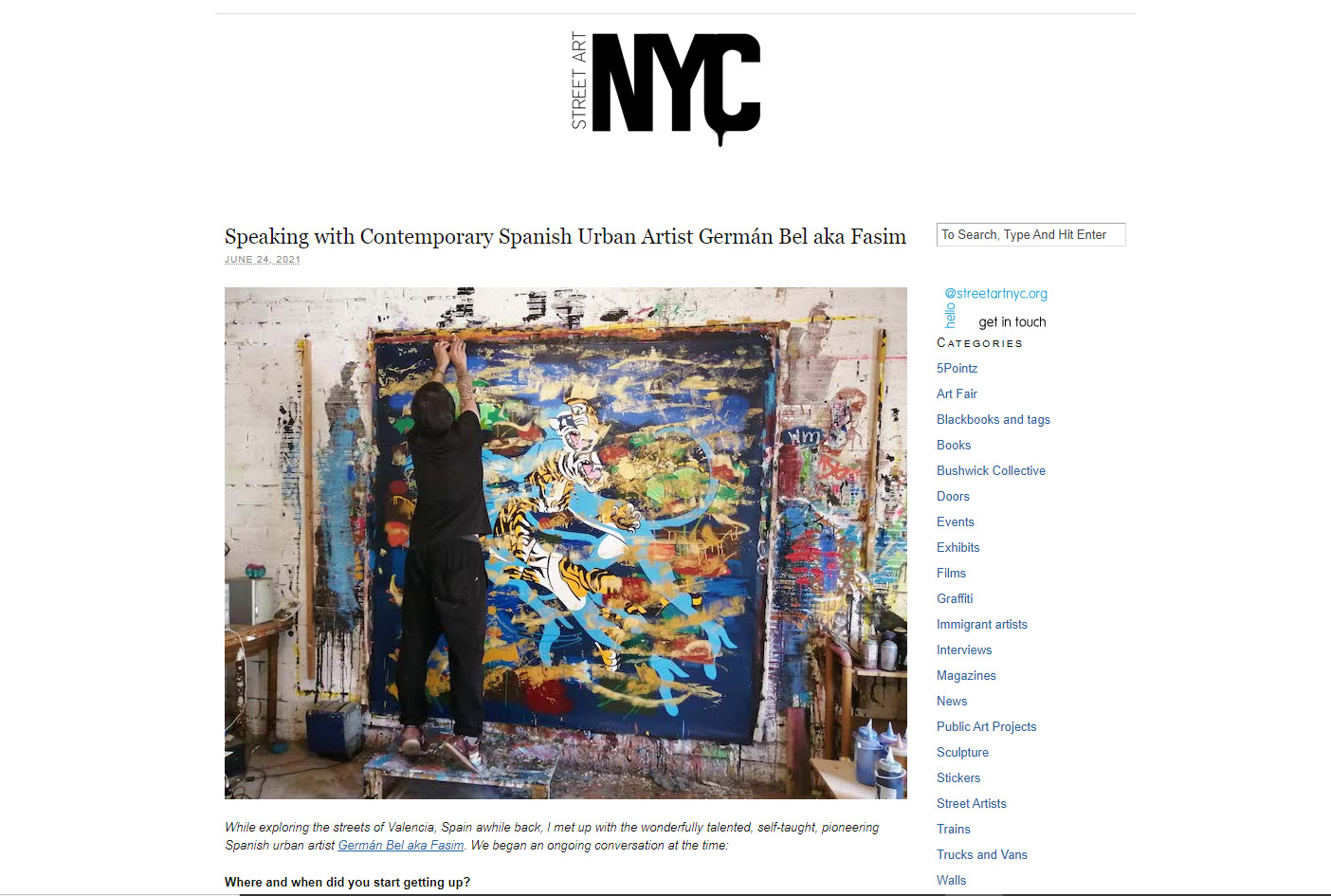 While exploring the streets of Valencia, Spain awhile back, I met up with the wonderfully talented, self-taught, pioneering Spanish urban artist Germán Bel aka Fasim. We began an ongoing conversation at the time:

Where and when did you start getting up?

It was around 1984-85 in the Barcelona neighborhood of La Trinidad. I was 12-13 years old. I started with hair color sprays, colored waxes, paint brushes and any paint sprays that we found at the workers’ construction sites. Spray paint cans were very expensive back then. It was difficult to afford to buy any, although soon we learned to “lift” them without problems!

Who or what first inspired you to get up?

Back in the 80’s, we had very little information about the graffiti movement, and we were lucky that the Style Wars documentary was broadcast on television. It was very instructive; we learned a lot in one night just from watching it. The writer whose style most inspired me was Ricardo Mirando aka Seen. He was undoubtedly the graffiti king!

Have you any favorite surfaces?

All of them have their charm. Painting on large walls is very rewarding, but it is also very exhausting. I prefer painting in open places like public parks. I like the way the art in the public sphere interacts with the citizens and with the urban environment.

My current favorite surface is the canvas; I love its touch and its smell when it’s cut. It can withstand any onslaught! I also like paper. It’s the surface I use most often. It’s lightweight and allows me to generate many works in a short space of time. 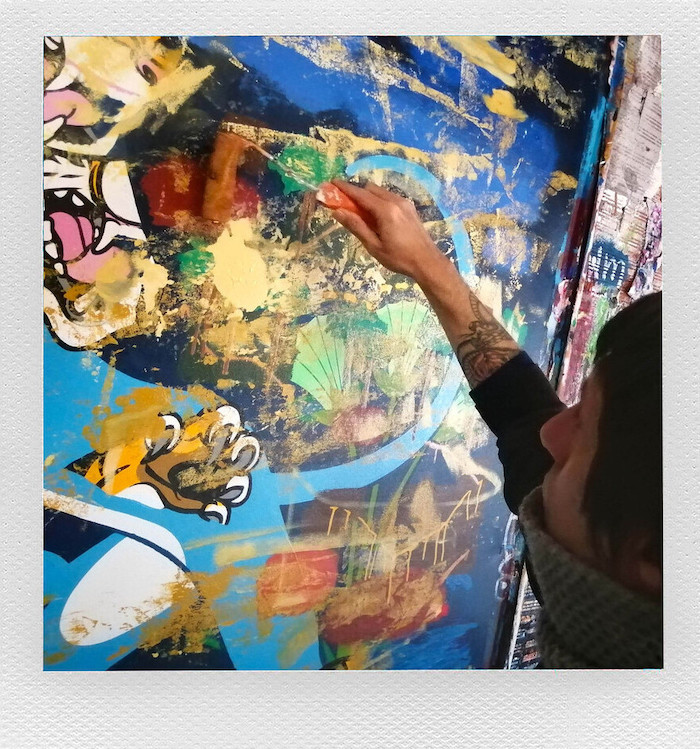 What was it like back in the day in Spain?

When we started in the mid 80’s in Barcelona, there were very few tags on the street. But there were other types of writings — mostly alluding to the civil war, Franco’s dictatorship, social injustices, the nuclear threat, the armed group ETA and varied political party propaganda. It was referred to as “pintadas o las pintadas.”

Can you tell us something about the pioneers of the Barcelona urban art scene?

The pioneers of urban art in Barcelona were called  ‘Los Rinos’. They painted giant fried eggs, yogurt containers, paellas, French fries, roasted chickens, dripping spirals – all on train tracks. We found it very funny, and we spent hours sitting on the tracks, smoking and laughing, as we watched them.

Among the many crews in Barcelona were the Kukufruts, an all-girl, all-punk group. Today one of them, Pi Piquer, is a celebrated painter. The Trepax were stencil pioneers and made fascinating stencils of two and three meters. They are wonderfully impressive and, unfortunately, still not documented. 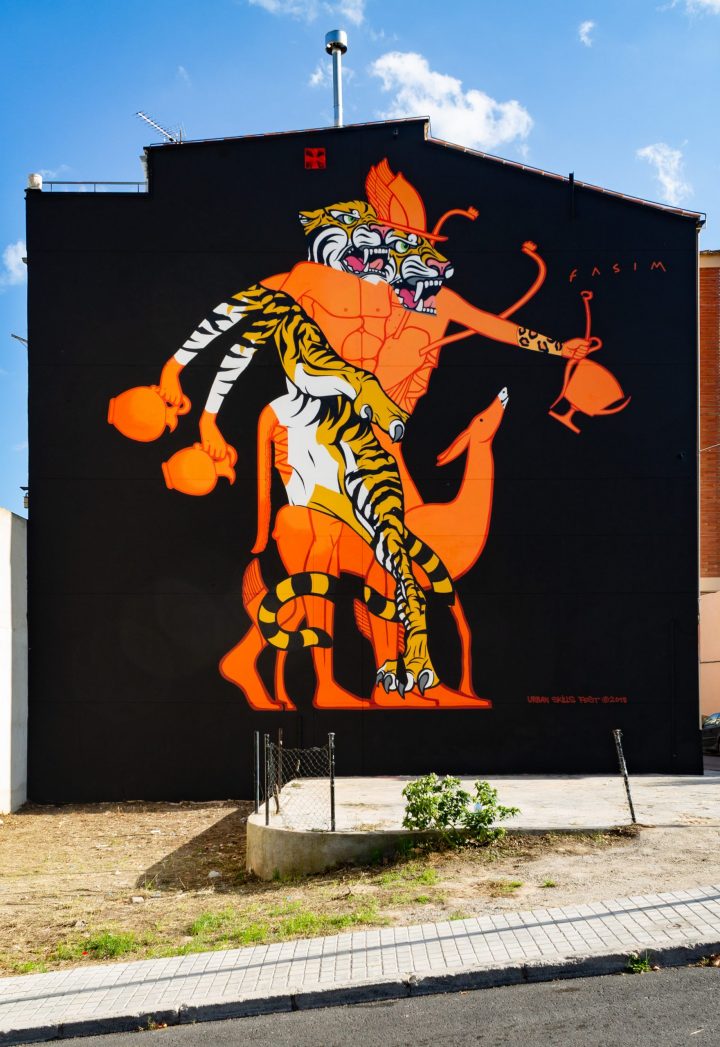 Do you prefer to paint in the street “with permission,” or would you rather do it illegally?

I come from a generation where painting with permission was frowned upon. I painted a wall in a public area in Valencia in 2010 dedicated to war victims. I had grown tired of seeing the horrible deaths and terrible atrocities on television for years. When I arrived with my ladder and paint and started to work, a police car stopped me. But with the help of some neighbors who defended me, I was able to continue. When I finished the wall a few weeks later, I prepared a series of reports that were published in many different cities around the world.

I was proud of what I had accomplished. I had painted a wall with a theme of political and social criticism in the center of Valencia, with no budget and without any permission and with some personal risk. And I was able to promote it around the world. Today the wall is a classic – without the support of any institution.

How did your family feel about what you are doing?

Well, I come from a family that had disintegrated. My life has been somewhat like Huckleberry Finn’s! I ended up living with my maternal grandparents, who lived in a suburb infested with heroin addicts. Its main inhabitants were Andalusian immigrants, with huge social problems.

Although my grandparents liked to see what I painted, they did not perceive it as something positive. They looked favorably on such workers as laborers, receptionists, mechanics… But to be a poet or painter in such an environment was almost a disgrace and a possible death sentence! They believed that one did not earn money with painting — that it was something for troubadours, bohemians or misfits.

They did come to accept it with resignation. Today it is different. Many people come to see my work in exhibitions or on the street. And I am sure that my grandparents, somewhere in the cosmos, would be very happy with my achievements. 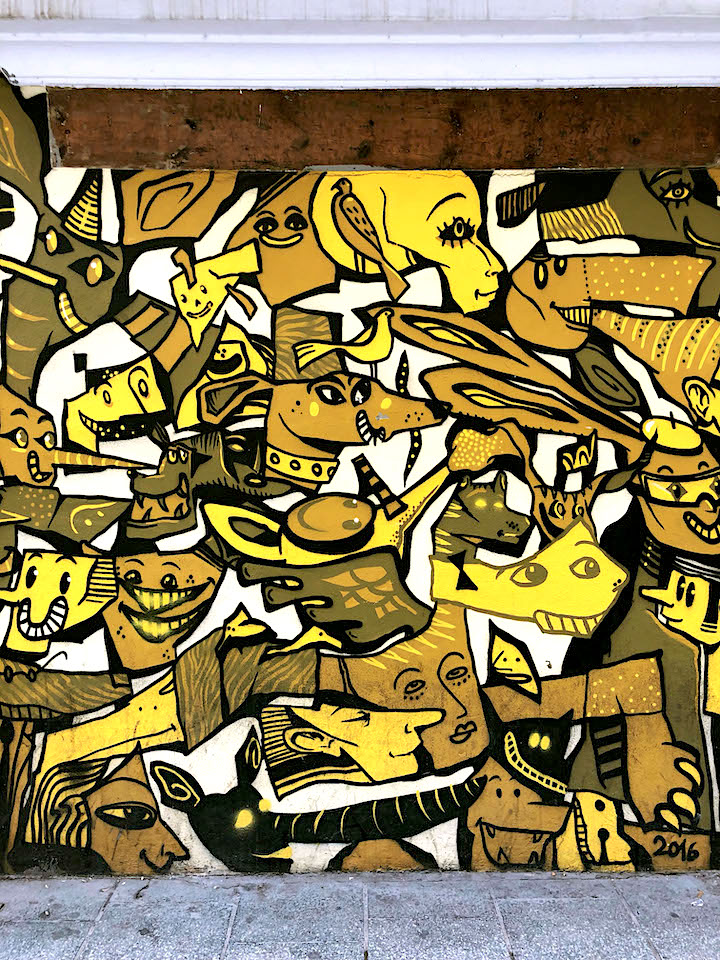 What percentage of your time is dedicated to art?

What are some of your other interests?

Literature is another great passion. I am a member of INDAGUE (the Spanish Association of Researchers and Disseminators of Graffiti and Urban Art) and I participated in a conference with Fernando Figueroa. More recently, I’ve been preparing some very funny, pictorial literary cut-ups, fusing elements of crime novels, poetry and surreal stories. It’s about the jungle, snake men, talking tigers…. It’s my first foray into literature and I like its subversive, fantastical style. I also love cooking. I love to cook when I have time. It relaxes me and I can disconnect from everything. I love to prepare new dishes.

In New York, there is often a divide between graffiti writers and street artists. Have you any thoughts about that?

I am an artist who has come to painting through tagging. Graffiti helped me to free myself from a very distressing situation of living in a very difficult neighborhood. It was the escape valve. The streets can teach you a vandal-like creative discipline that can move you in the direction of fine art. Tagging is a first contact with artistic creativity.

A few years after I started getting up on the streets, I began to paint. A turning point was my visit to JonOne‘s studio in Paris in the legendary Hôpital éphémère. Jon had original paintings by artists from all over the world including many from New York — like Rammellzee, A-One, Lady Pink, Crash, Futura2000… He showed me books by Basquiat  and Miquel Barceló. Walking around his house was like visiting museum. I came to understand the relationship between tagging, graffiti, street art, urban art and fine art.

Nowadays, anyone can buy spray paint, paint a bunch of hearts in an alley, take a picture, upload it to social networks and say he is a street artist. He does this without any threat of arrest — just to be cool, to be trendy. But what he is doing is trivializing the entire movement. He is not a “street artist”. He is just a tool of capitalism. 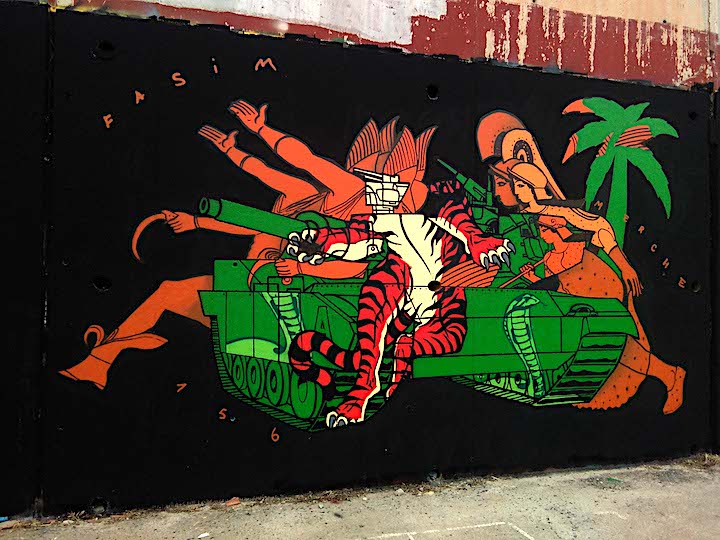 What about cultural influences?

I am very interested in different cultures, and I have many cultural influences. Art is what survives as a testimony to fallen tyrants, kings, empires, dictatorships, dogmas and religions. What remains is the work of artists, of visionaries and poets, of craftsmen who shaped the ideas of their time. I study art every day, and even when I am studying history or archeology, I always encounter art. Among my many interests is Deir-el Medina, the royal artisan village of the pharaohs in ancient Egypt. These humble artisans who lived in adobe houses crafted many of the incredible works that fill today’s museums.

Today I am more influenced and inspired by my culture — the millenary culture of the Mediterranean — than by all the other modern or contemporary western influences. It is the source of all the elements that make up civilization: architecture, music, painting and sculpture, poetry, philosophy, astronomy and more.

Do you have a formal art education?

I am what others label as “self-taught,” as I study on my own every day — away from the influences of the art establishment. For several months in the early 90’s, I studied painting at the Cucurulla Academy in Barcelona, where we copied natural models and fashioned boring plaster sculptures. My most distinct memory is of a very young, thin model — a heroin addict whose body was filled with bruises. She would fall asleep between poses, and then she would wake up and apologize.

But I didn’t stay in school. I preferred visiting galleries and museums. My favorite gallery was the Joan Gaspar Gallery. It was almost always empty, and there I found original and serial works of great quality by the hands of: Picasso, Braque, Miró, Masson, Clavé, Tàpies, Calder, Viladecans, Mitoraj... For me it was as exciting as entering the Cave of Altamira or Lascaux. Silently facing the works of great, internationally-recognized modern and contemporary creators was my first and my best school. For a young painter, there is no better school than to witness and face these works close-up in museums and galleries. I also read extensively at the time. They were very intense years. 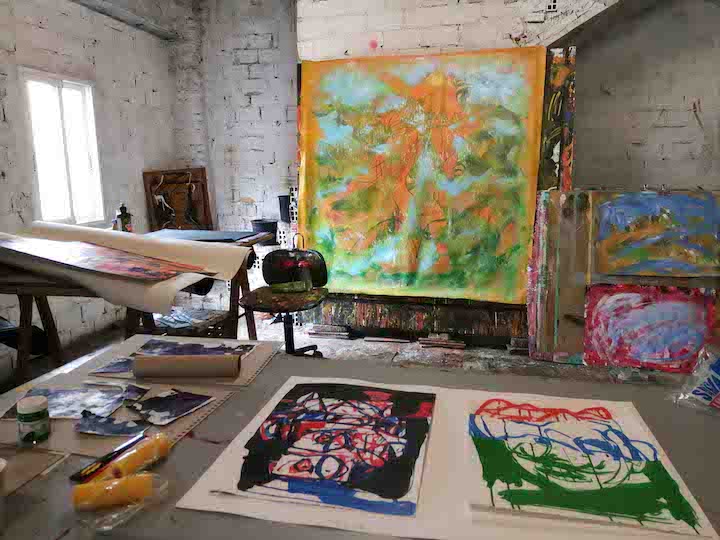 Do you work with a sketch in hand or do you just let it flow?

It depends on what I want to do. In general, I’m always well-organized. When I paint a large-scale mural, I come prepared with a gridded sketch and all of the paint that I’ve chosen carefully with a color chart. When I am going to make illegal pieces on walls, I come prepared to execute them quickly. When I was younger, I used to almost always improvise, but with age I have become more disciplined. Wherever I work, though, I also let the unexpected happen, as that is part of the creative process — even when we think we have lost control.

Are you generally satisfied with your finished work?

With the works I show, I am either half-satisfied or quite satisfied. As a general rule, I don’t show on social media or exhibit something I don’t like. I am quite critical of my painting, and I can repeat the painting process on the same canvas many times until it takes on an unexpected meaning. Life is a mystery, and painting reflects that mystery to us, just as the water reflects the image of Narcissus. While painting, I often become very fond of a piece — falling in love with it or maintaining a deep and ephemeral romance with it during the process.

As you know, it has been a very strong, transformative experience on a planetary level. All our lives have changed radically, and together we are now experiencing a post-traumatic stress, unlike anything we’ve known. I have had to adapt to many changes – some very deep – quickly. I stopped spray painting on the streets in March 2020 at the beginning of the pandemic. I am more concerned now about the harm that sprays can cause the environment. I could do without sprays, but I could not do without painting or drawing. I am horrified by the idea of a world destroyed by selfishness, so I have decided to stop and wait a bit.

I’ve also perceived changes in the direction of my work. I’m now working on themes that a few years ago I would not have imagined. My current series of paintings is tentatively titled “Erased Landscapes.” It has many meanings. It is a metaphor expressing nature’s outrage at us for disregarding our environment, but it also a reference to the mania or obsession to erase all urban graphic signs in big cities, leaving in its wake a trail of strangeerased landscapes. It is also a nod to the idea that a canvas or a painting is a window to another reality, the window within the window.